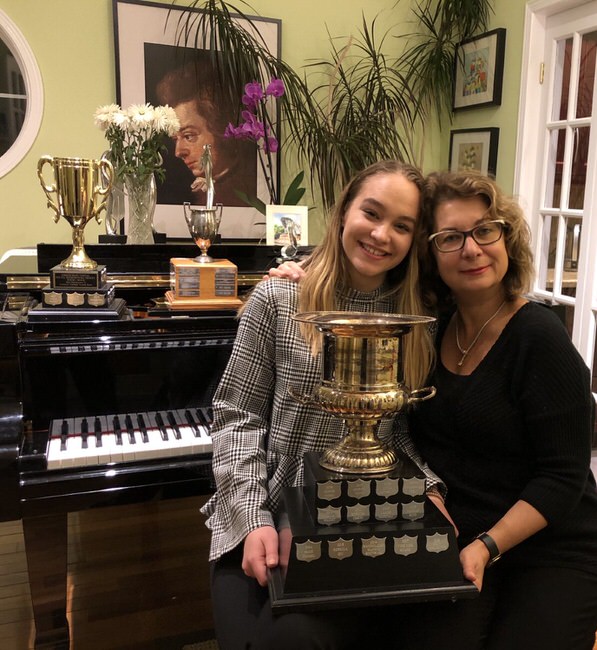 Olga Tcherniak was awarded with the Queen’s Golden Jubilee Medal for her distinguished contribution to the cultural dynamics in the province of Ontario. After graduating from Mussorgsky School of Music for Gifted in Russia she continued her Graduate and Postgraduate studies at the Moscow University and University of Western Ontario and holds Degrees in Performance, Pedagogy and Musicology. Olga has been a professor of Ural State University from 1982-1989 and has taught at St.Clair College in Michigan from 1995-2004. She is known as a performer, teacher, workshop clinician and a vocal coach in the US, Canada, Russia, France and Israel.

Olga’s collaborations included many leading internationally acclaimed performers. She also worked with the National Ballet of Canada and University of Western Ontario Opera Studio. Olga has given solo performances in Canada and US and was heard on CBC radio and NBC television.

Olga was also known as a Music Director and Host of International Concert Series at St.Clair College in Michigan and the Lawrence Centre for the Arts in Lambton County, Ontario. During the years of 2007-2010 Olga has lead the Young People’s Concerts at the RBG and Hamilton-Halton Schools in collaboration with the Glenn Gould School. The project was sponsored by the Ministry of Culture of Ontario.

Currently residing in Ancaster, Ontario, Olga teaches piano at the Redeemer University College,  performs as a collaborative pianist and maintains successful private studio. Among her students there are Winners of various Prizes from Canadian and American Competitions as well as the recipients of numerous Scholarships from the leading American Universities.

Olga Tcherniak is a Member of the College of Examiners with the Royal Conservatory of Music.